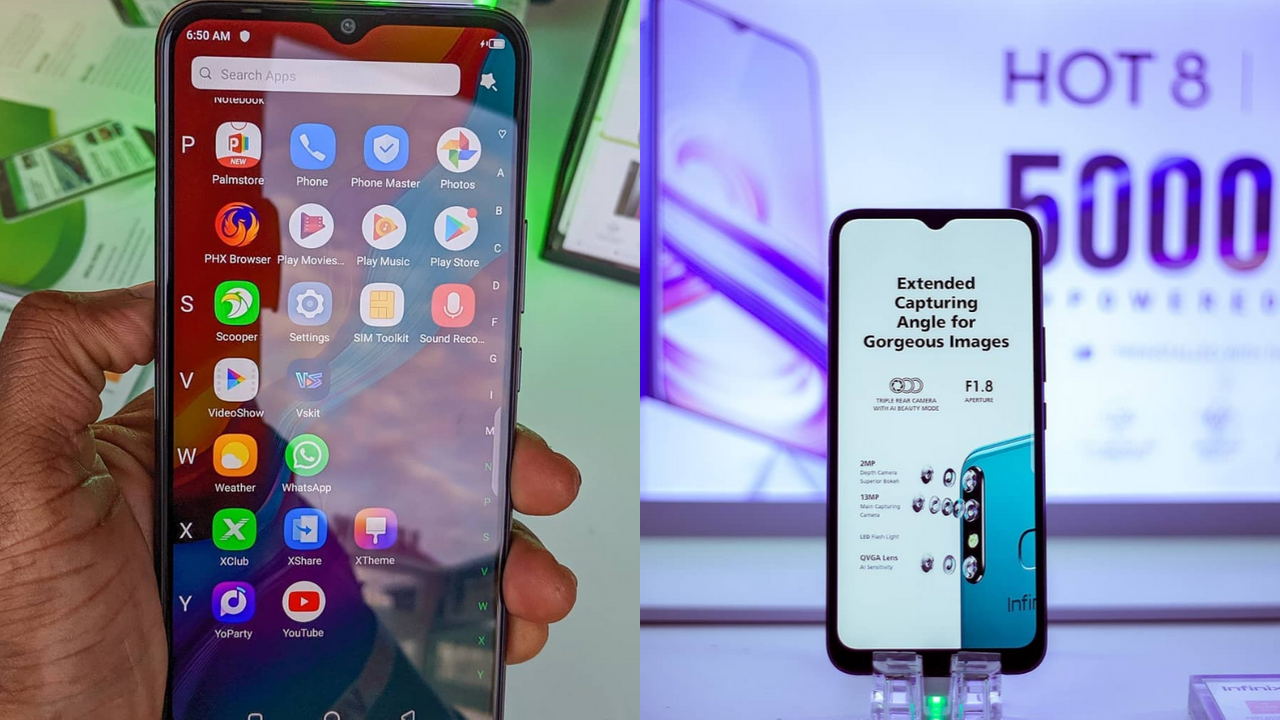 Touching on the device itself and features, this is sure to be a smartphone push Infinix lovers and budget phone lovers to rush over it.

Powered by Android 9 with 4 GB RAM, with 5000mAh battery capacity, and 32GB of internal storage. And it comes with a triple camera setup at the back. It is also a dual SIM device.

Not forgetting, the phone actually comes in two models: Hot 8 which is 4G enables and the Hot 8 Lite which is 3G. Let’s dive into the Infinix Hot 8’s specification to know more about the device.

The Infinix Hot 8 features a sleek look and the round edges. It is coming in 4 colour options: Cosmic Purple, Midnight Black, Quetzal Cyan, and Shark Grey. The SIM & memory card slot is on the left, with space for two SIMs and micro SD card.

On the Infinix Hot 8, we have a 6.5-inch sized display screen. The resolution of the Hot 8 is pegged at 720 x 1600 pixels with 20:9 aspect ratio. The phone has a screen-to-body ratio of over 80 percent. Screen type is IPS LCD capacitive touchscreen.

This Infinix device is rocking the MediaTek Helio A22 chipset. The Quad-core Cortex-A53 processor is clocking up to a speed of 2.0 GHz.  The second model houses a Mediatek MT6762 Helio P22 chipset with an Octa-core 1.8 GHz Cortex-A53 CPU.

Looking at the software side, we see the Infinix Hot 8 running on Android 9 (Pie). It is coupled with Inifinix’ in-house XOS 5.0 UI.

On the storage side, the Infinix Hot 8 features a base capacity of 32GB.  The company decided to go with a 2GB RAM for the Hot 8. You can upgrade the size to 256GB via a microSD card.

The Infinix Hot 8 features a non-removable Li-Ion battery. The battery is a plus point of this phone. The battery has a capacity of 5000 mAh. Standby time is not known right now.

Obviously, this battery can make the phone last through 24 hours and probably even more. As with recent Infinix devices, the charging does not consume too much time. So there’s no need for long hours to charge this phone.

The Hot 8 comes with 3 cameras at the back. They include a 13 MP wide camera, and a 2 MP for depth of field sensing. The third lens is a low light sensor, meaning, photos in darker environments are going to be lit up.

The 13 MP lens, being the primary of the 3 at the back, comes with f/1.8 aperture and phase detection autofocus (PDAF). The triple camera setup offers features like bokeh (portrait), panorama, beauty mode, and more.

The selfie camera on the Hot 8 is 8 MP, with a focus of f/2.0. It is a wide-angle camera. You also get a LED flash on the front to help you take good photos in dark environments.

The Infinix Hot 8 has a fingerprint scanner, which is mounted on its back. Also, there is an accelerometer, a compass, and a proximity sensor.

Full Specification of the Infinix Hot 8

Infinix Hot 8 and Hot 8 Lite has officially been launched in Ghana.

You can get these phones from any Infinix Mobile Ghana accredited dealer nationwide. 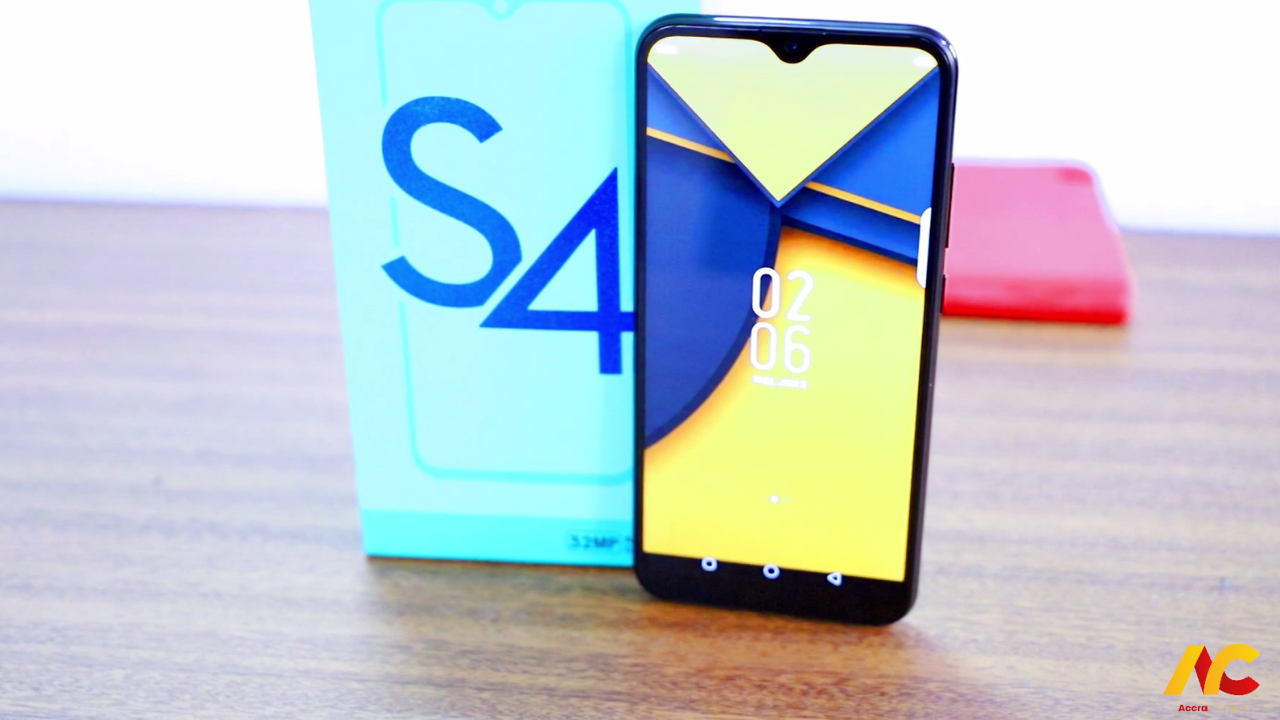 The pace of change in the smartphone scene has been rapid in the last decade, from the introduction of touchscreens to the consistent upgrading of network speed.

It was impossible to imagine the possibility of using a phone as a tool for habitually accessing the virtual world, now its as ubiquitous as sliced bread. When touchscreens were first introduced, they completely changed how we perceived and utilized smartphones. There was a similar transformative shift with the development of smartphone intelligence, specifically cameras infused with AI for better image detection and optimization among others.

Infinix, a brand that has been continuously providing the most cutting-edge technology to consumers, is about to empower them by introducing the impressive 32MP Selfie camera, quite a historic feat that can barely be rivalled. Infinix S4 is set to change the selfie scene with its 32MP AI selfie camera that has significantly higher intelligence with automatic detection capabilities.

The phone also comes with a 6.2’ waterdrop display screen, a triple rear camera for much better portrait images, a fast octa-core processor, a 4000mAh battery power and an upgraded XOS 5.0 software for a seamless operation experience. Infinix is set to assert its authority and reclaim its spot in the competitive smartphone market that had been hemmed by its rivals, providing its customers with an empowerment device to that would not just elevate their selfie skills, but also help position them on the spotlight.

The S4 is set to challenge the smartphones currently dominating the mid end category, and claim its rightful spot among the top stunning smartphones this year. Infinix has done very well in the past in the entry level category with its SMART and HOT series options. The S series branched out of the HOT series to focus on selfie optimization. The S4 is all about creating the ultimate superior selfie for a purpose, which is to create an empowerment potential for our consumers. When a selfie is taken on the S4, it will be one of a kind, the kind that might turn one into a social media star.

Imagine vivid selfies that can be captured with the 32MP AI selfie camera, such a big capacity with 1.6um ultra pixels and an F2.0 aperture. The camera has a far much higher capacity for light intake and absorption, producing such surreal selfies that can only be fantasized about.

The advanced Samsung S5KGD1 sensor as well the 5P optical lens gives the best contrast and resolution ratios for optimal image refinement. The triple 13MP+8MP+2MP rear camera is an added bonus, permitting the capturing of far wider angles than what is normally possible with an ordinary dual camera.

The triple cameras are responsible for depth, distance and field of view respectively, with the S4 allowing for up to 120°capture. Portrait images from the S4 could be exported to the gallery directly, therefore could easily empower a struggling amateur photographer’s career. The glossy dual glass-like design is the icing on the cake.

It gives the S4 such a royalty appearance, essentially positioning it on the same level as the high-end smartphones.

Empowerment is not possible without reliable power, and Infinix has never disappointed with its battery power. The S4 has incorporated a Smart power management system that helps optimize power utilization by automatically inducing inactive status for apps not in use and halting their background data uptake. In other words, only the needed power is consumed each time the phone is in use, a true innovation that empowers the green environment conservation movement.

Better security is no longer an option but a must have in a gadget, the S4 has infused an algorithm that can detect up to 1024 data points on the face, significantly increasing its facial detection accuracy. The face unlock function in combination with the fingerprint lock technology, together provide solid security for all the data stored in the device.

Infinix is committed to continuously integrate fashion and technology for intelligent lifestyle experiences to those who need it most in the emerging markets. The S4 was re-engineered to come up with the best superior smartphone that is not exorbitant. It will definitely be a gadget to empower many rising stars in various emerging markets, and a true game-changer in the selfie market.